How safe are your LiPo batteries stored?

Batteries on fire happen to others but can it happen to us?

First we have to understand why the lipo battery is so dangerous.

Lithium-ion (LiPo) batteries store energy like a spring. The lithium ions are forced between the atoms of the covalently bonded anodic material, pulling them apart and ‘stretching’ the bonds, storing energy. This process is called intercalation. After discharge, lithium ions leave the anode and enter the cathode. This is very electromechanical, and both the anode and cathode experience significant mechanical stress from this.

In simpler words, the battery when charged is under great internal pressure. Different from normal batteries like NiMH or NiCad.

The lithium battery is delicate in many ways! The electrolyte is a volatile and extremely flammable solvent that burns very strongly and easily. When the battery pressure builds up too much, the packaging breaks, triggering the leakage of material (which is highly flammable).

In practice, it works like this, if the battery gets too hot, it happens. If overloaded, it becomes unstable and the mechanical shock can make them explode like a grenade. If it is discharged in excess, part of the metal at the cathode undergoes an irreversible chemical reaction and will form metallic shunts. These bypasses will be invisible, until charging expands part of the battery enough that the separation membrane is punctured by one of these bypasses, creating a short circuit, which obviously results in a fire.

If you google for “lipo fire” and go to images, you will see the damage it can cause. In the forums it is possible to find people who lost a garage, kitchen and even an entire room because of batteries on fire! So we need to talk about caution!

For those who don’t care about this, read this post and try to think a little about the future and the stress that this situation can generate.

It is worth mentioning that some home/apartment insurance does not cover damage caused by LiPo battery (the ones that we use in the models). This type of battery is considered dangerous and in many cases, you need to notify the insurance that you have batteries at home and they will add to the policy that you have dangerous objects (similar situation for those who stock ammunition and explosives at home, need a clause on the insurance). So it’s worth paying attention to that too.

That said, there is no such thing as a safe battery (not even a safe situation). But we can work with ideas and tips to alleviate and even circumvent this type of situation.

If you’re storing the lipo in the drawer… Well, you already know that’s wrong, don’t you?

So where to store and what to do?

Never, ever, ever keep your batteries charged!! It is recommended to store in storage mode, which is basically 3.8V per cell.

If you’re done flying and it’s on 3.3V, set your charger to charge a little more so you can store it for the week at the right voltage!!

Don’t forget, a fully charged or discharged battery can start the chemical reaction!

Run away from it! A simple search for “lipo safe fire” and you will see that these bags catch fire along with the battery.

Bat safe is a relatively new and interesting product. Several videos have already demonstrated its potential. Thanks to the holes in the lid, the gas can escape and the box can contain the entire flame.

The manufacturer pays attention that the box has a maximum battery limit. In the case of the photo below, the box supports batteries of up to 10A. There’s even room for more batteries, but with more charge, the chance of the explosion being bigger is great and the box may not contain the flames.

I’m particularly using this option. The box costs around $75 (USD) at the time of publication. 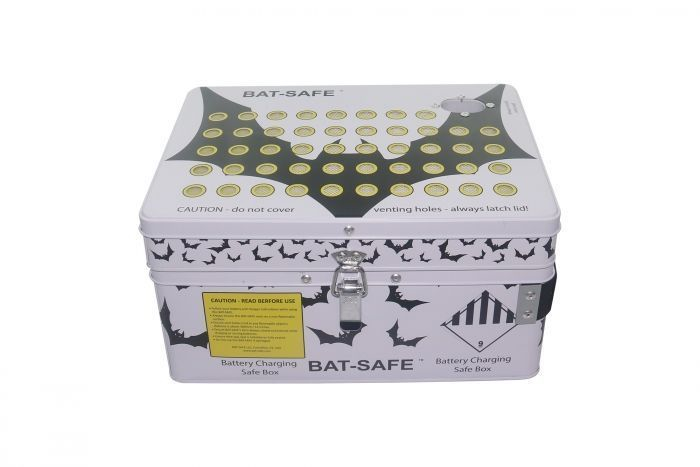 Ammo box is an interesting and inexpensive solution. There are many videos showing these boxes containing the flames.

But we need to break a myth here: Ammo box is not fireproof, let alone designed to contain explosions. Despite being developed for ammunition, the objective is to protect the ammunition in transport and not in case of explosions. Still, because it was designed to carry ammo safely, it’s strong and sturdy (of course, you don’t want an ammo box that drops all the ammo around it when it drops to the ground).

Despite what many people believe, it is possible to buy a box like this for around $20 (dollars) on the date of publication. 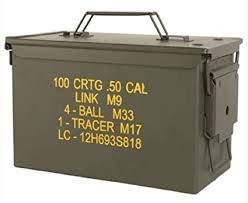 It is worth remembering that not always the smoke that comes out will result in fire. As it is a chemical reaction, a lot will depend, from the location, temperature, humidity, and battery charge.

Either way, it’s good to be ready for it.

If you keep your batteries in a drawer or in an unprotected way, you’re really going to have a problem. The fire can quickly consume the surroundings and your room (and even house/apartment) is compromised.

Using one of the boxes above, you have a better chance of containment, but still a lot of gases will escape. In addition, these boxes will easily pass 100 degrees, and can set fire to things around them.

So what to do?

I particularly recommend an ABC (CO2 extinguisher), as the chance of the battery catching fire when charging is high, and the ABC standard is made to contain fire involving electrical network, in this case your charger.

That’s right you read! If you have a cat, the problem is already partially solved.

It is not possible to stop the fire of lipo because of the reaction, but it is possible to contain it. Pouring sand over the battery will ensure that no flame escapes. The smoke will come out, there’s no way out, we’ll talk more about it later!

This is your best ally. Place a smoke detector near your batteries. Whether charging or storing. The goal here is for the detector to beep at the first trace of smoke that comes out.

Speaking of smoke, it’s worth making a HUGE parenthesis, and mentioning that the smoke coming out of the battery is EXTREMELY toxic! If you need to act in firefighting, try to protect yourself with a mask, cloth or even holding your breath. Breathing this smoke can cause several short and long term problems!

It may seem obvious, but the loading location is very important. If the batteries are protected by the box and the accident is on the balcony, closing the window and waiting (monitoring the situation) can be a way out of having to interact with the smoke.

It’s no use following the steps to know how to react to an accident, while you’re charging your batteries on top of the sofa or next to the television.

If the place is tight, you can buy some ceramic tiles to protect the floor and try to make a security perimeter around the battery. 1 meter on each side is recommended, so that the flames do not catch anything else. (Of course, this perimeter depends on the battery. A 2A lipo has a much smaller flame than a 5A battery).

The danger is real. It’s never happened to me in 10 years of hobby, but I’ve personally seen countless dangerous situations!

I’ve seen a T-Rex 700 go down in flames live, like a meteor. I’ve seen a colleague put everything in the car to leave and while he was saying goodbye, we saw white smoke coming out of the trunk of the car. There was just time to kick the suitcase away and it caught fire.

It is true that the greatest danger is in the process of charge and discharge. That’s why it’s worth paying close attention. But storage is very important! Don’t forget the storage voltage (3.7~3.8), find a suitable location and create an action plan in case something happens!

How have you done? Participate in the comments below and let’s exchange experiences!

Rafael Biriba Follow
Author and creator of the blog.
'If you want to fly, give up everything that weighs you down.'